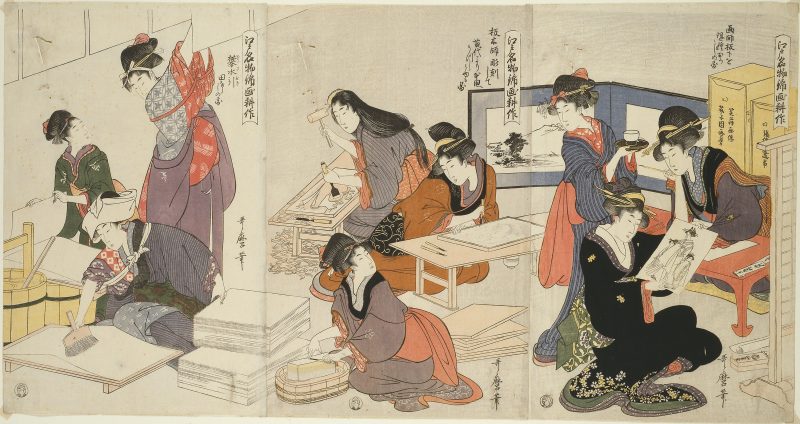 Ukiyo-e is a genre of Japanese Art which flourished from the 17th through 19th centuries. Its artists produced woodblock prints and paintings of such subjects as female beauties; kabuki actors and sumo wrestlers; scenes from history and folk tales; travel scenes and landscapes; flora and fauna and erotica. The term ukiyo-e translates as “pictures of the floating world”

Over the next few months Tusk Gallery/Artscope Publishing will be making available a large range of reproduction Japanese prints from this period printed on canvas and paper. They are not woodblock prints as such but the images are from this period. You can follow our facebook page to be kept up to date on what’s new until we get the images on our website. If you have any queries you can contact us via e-mail at art@tuskgallery.com.au

Some ukiyo-e artists specialized in making paintings, but most works were prints. Artists rarely carved their own woodblocks for printing; rather, production was divided between the artist, who designed the prints; the carver, who cut the woodblocks; the printer, who inked and pressed the woodblocks onto hand made paper and the publisher, who financed, promoted, and distributed the works. As printing was done by hand, printers were able to achieve effects impractical with machines, such as the blending and gradation of colours on the printing block.

The Japanese art of Ukiyo-e developed in the city of Edo (now Tokyo) during the Tokugawa or Edo Period (1615-1868). These two names refer to the relatively peaceful 250 years during which the Tokugawa shoguns ruled Japan and made Edo the shogunal seat of power.

The social hierarchy of the day, officially established by shogun rulers, placed the merchants, the wealthiest segment of the population, at the lower end of the scale. With their political power effectively removed, the merchant class turned to art and culture as arenas in which they could participate on an equal basis with the elite upper classes (warriors, farmers, and artisans). It was the collaboration among the merchants, artists, publishers, and townspeople of Edo that gave Ukiyo-e its unique voice. In turn, Ukiyo-e provided these groups with a means of attaining cultural status outside the sanctioned realms of shogunate, temple, and court.

Although Ukiyo-e was initially considered “low” art, by and for the non-elite classes, its artistic and technical caliber is consistently remarkable. Reading the images demands an extremely high level of visual, textual, and cultural literacy. From its earliest days, Ukiyo-e images and texts frequently referred to themes from classical, literary, and historical sources. At the same time, Ukiyo-e constantly expanded to reflect contemporary tastes, concerns, and innovations over the two and a half centuries of its development. The result was an art that was both populist (of and for the people, readily accessible, plentiful, affordable) and highly sophisticated. In summary, Ukiyo-e presented both the historical and all that was current, fashionable, chic, and popular. In the hands of the Ukiyo-e artist, the ordinary was transformed into the extraordinary.

Here’s a bit about 3 of the artists from the Ukiyo-e period. We have reproduction images available as framed canvases and framed prints on paper by these artists.

Utamaro, in full Kitagawa Utamaro, original name Kitagawa Nebsuyoshi, (born 1753, Japan—died Oct. 31, 1806, Edo, Japan—d.), Japanese printmaker and painter who was one of the greatest artists of the ukiyo-e (“pictures of the floating world”) movement; he is known especially for his masterfully composed portraits of sensuous female beauties.

Probably born in a provincial town, he went to Edo (now Tokyo) with his mother. There, under the name of Toyoaki, he started painting and designing rather unoriginal wood-block prints of women.

Utagawa Kunisada  (1786 – 12 January 1865), also known as Utagawa Toyokuni III, was the most popular, prolific and commercially successful designer of ukiyo-e wood block prints in 19th-century Japan. In his own time, his reputation far exceeded that of his contemporaries, Hokusai, Hiroshige and Kuniyoshi. He was a very prolific, successful and at his time highly appreciated leading designer of ukiyo-e (Japanese woodblock prints). He was born near Edo as the son of an affluent merchant with a ferry boat license. At the age of 15 Kunisada joined the famous art school of Utagawa Toyokuni and took the artist name Kunisada. In 1807 Kunisada Utagawa produced his first illustrated book. And in 1808 his first actor prints were published. His fame grew fast. While other artists like Kuniyoshi or Hiroshige had to fight for recognition for years, he was successful from the beginning. He should become the most commercially successful of all woodblock printmakers ever. His early success may not have had a good influence on his personality. He had a reputation for his conceited personality.

Hokusai, in full Katsushika Hokusai, professional names Shunrō, Sōri, Kakō, Taito, Gakyōjin, Iitsu, and Manji, (born October 1760, Edo [now Tokyo], Japan—died May 10, 1849, Edo), Japanese master artist and printmaker of the ukiyo-e (“pictures of the floating world”) school. His early works represent the full spectrum of ukiyo-e art, including single-sheet prints of landscapes and actors, hand paintings, and surimono (“printed things”), such as greetings and announcements. Later he concentrated on the classical themes of the samurai and Chinese subjects. His famous print series “Thirty-six Views of Mount Fuji,” published between 1826 and 1833, marked the summit in the history of the Japanese landscape print.

We have a very large range of reproduction Hokusai prints printed on canvas and paper. Click here to view the range.